Numbers Driving the Optimism in Trucking, Then and Now

Truck drivers never stopped delivering, even during the worst depths of the pandemic. 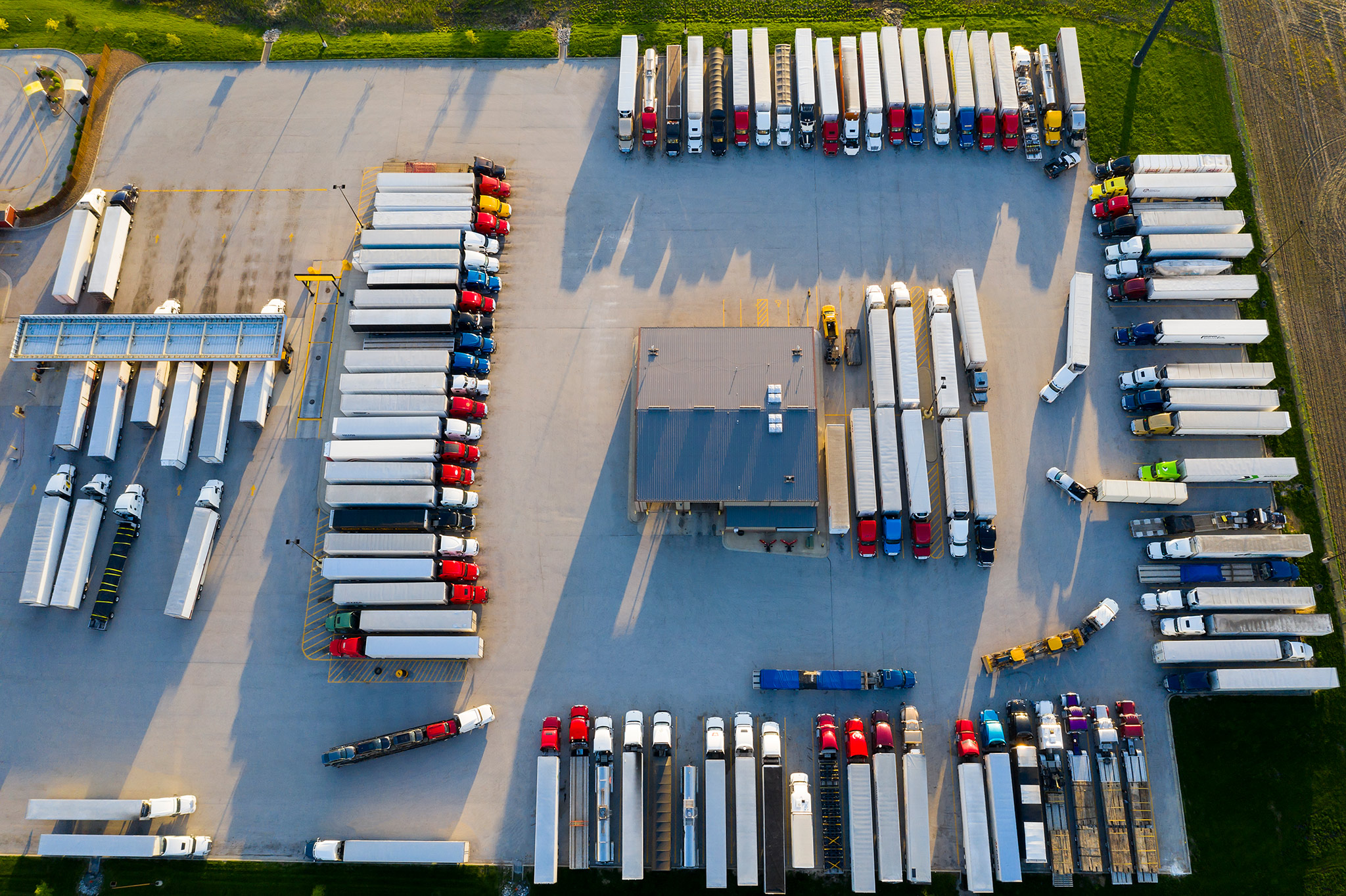 Growth in the U.S. economy boomed in 2018, slowed in 2019, and turned south in 2020 when COVID-19 started to spread widely in March. In 2019, trucks shipped 72.5% of all domestic tonnage, including an increase of 366 million tons over 2018. Also, across the northern and southern borders, trucks moved three-quarters of the value of trade between the U.S., Canada, and Mexico. Compared with previous recessions, trucking fared far better than the overall economy as the recession in the first half of 2020 was concentrated in the much less freight intensive, services sector.

At the start of 2020, the U.S. remained in the longest economic expansion on record with the unemployment rate at 50-year lows. In the three primary categories of freight—retail, manufacturing, and housing construction—only manufacturing was struggling from an industry-specific recession in 2019. In January, retail sales notched a record high, and construction on new homes surged to its highest level in over a decade, according to the Census Bureau. Even manufacturing showed signs that it bottomed out in 2019, as the Institute for Supply Management’s Purchasing Managers Index reported an expanding manufacturing sector in January and February after 5 months of contraction.

On the trade front, the signing and ratification of the United States-Mexico-Canada Agreement (USMCA) alongside a Phase I deal with China generated more optimism for growth in 2020. However, when the U.S. and China signed a Phase I trade agreement in March, most of China’s economy was shut down to prevent the spread of COVID-19. What was a headwind to watch in February with respect to trade with China, COVID-19 was declared a pandemic by the World Health Organization on March 11, 2020.

By the end of March, much of the U.S. was under lockdown orders. Truck drivers were called upon to deliver essential PPE and to meet the demands of toilet paper stockpilers. Unfounded concerns about food shortages skyrocketed grocery store sales at the end of March, pushing grocery sales up 25% over February. At the same time, stay-at-home orders undercut spending at restaurants and bars by 30% from February to March. Additionally, customers and businesses shifted even more purchases online, boosting e-commerce sales 14% above a year earlier. 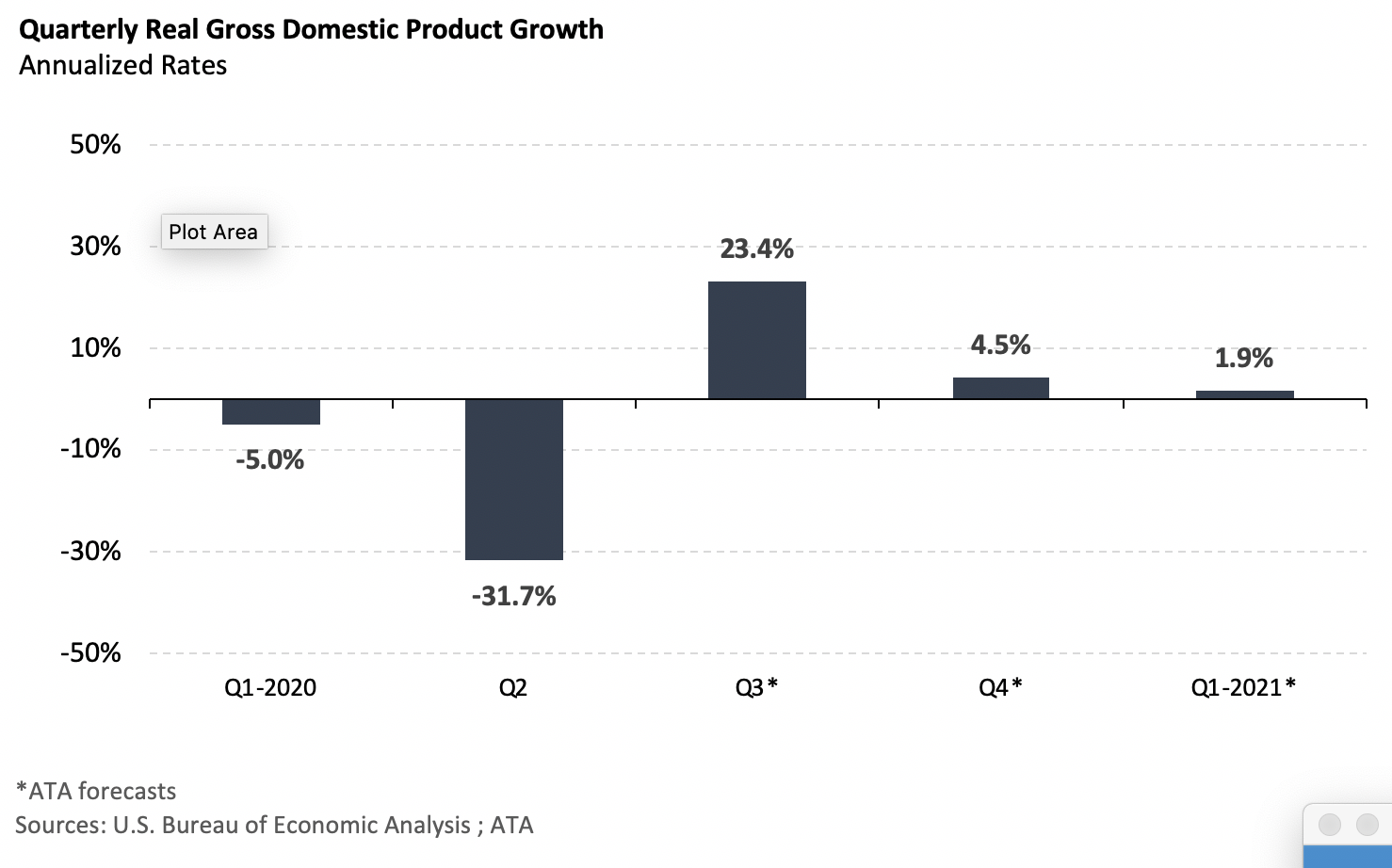 In May, optimism was renewed as the economy showed signs of recovery with bounce-backs across retail (+18.3%), manufacturing (+3.9%), and home construction (+11.1%) from what is likely to be the shortest, but deepest recession in history. Though tonnage in May remained subdued, it didn’t fall as far as other economic indicators in April, so there was less room to increase. Remarkably, truck tonnage maintained relative strength over the recession.

To end the second quarter, June economic indicators painted another positive picture of recovery. Business reopenings, though operating at a lower capacity than in February, combined with pent up consumer demand ignited expenditures above prior year levels at retail stores. According to the Federal Reserve, manufacturing output in June increased by the largest amount on record going back to 1972. Also, housing starts surged 17.5%. Alongside gains in the primary drivers of freight, for-hire truck tonnage spiked 8.9% nearing pre-COVID levels. Despite better than expected numbers late in the second quarter, year-over-year comparisons across the economy revealed the economy was still lagging behind its potential.

"The second half of 2020 bodes well for trucking as the goods-economy outpaces the bigger services sector."

Through the recovery, demand for freight will come back faster than the demand for services. Restaurants and movie theaters will operate at a lower capacity, especially as colder weather approaches, if the pandemic is not contained enough to ensure consumer confidence in their own safety. As a result, consumer spending will be more focused on goods, helping truck freight. One challenge for motor carriers is having enough capacity for shippers. Despite a robust spot market, it is likely some small fleets succumbed to COVID challenges and rising liability insurance premiums. Additionally, for-hire fleets are operating fewer trucks than a year ago. On top of lower capacity, recruiting and training drivers in the midst of a pandemic makes replacement a challenge. The new drug and alcohol clearing house database says there are more than 21,000 drivers that had a positive test this year and have not even started the return to duty process. Add it all up, and as before the recession, the driver shortage will remain a problem.

While the economy is not on pace to return to its levels at the start of 2020 within the next few months, most of the drag is in services. When consumers can’t spend as much on dining out and at sporting events, they can click their way to more household items and clothing. Restocking has helped volumes, but without more stimulus, freight is likely to level off. Still, not all freight is the same. The industrial side of freight movements is lagging behind the consumer side, but it’s emerging steadily from the depths in April. Although uncertainty is widespread, the numbers we’ve seen since the depths of the pandemic point toward a steady economic recovery to pre-COVID levels with freight moderating. 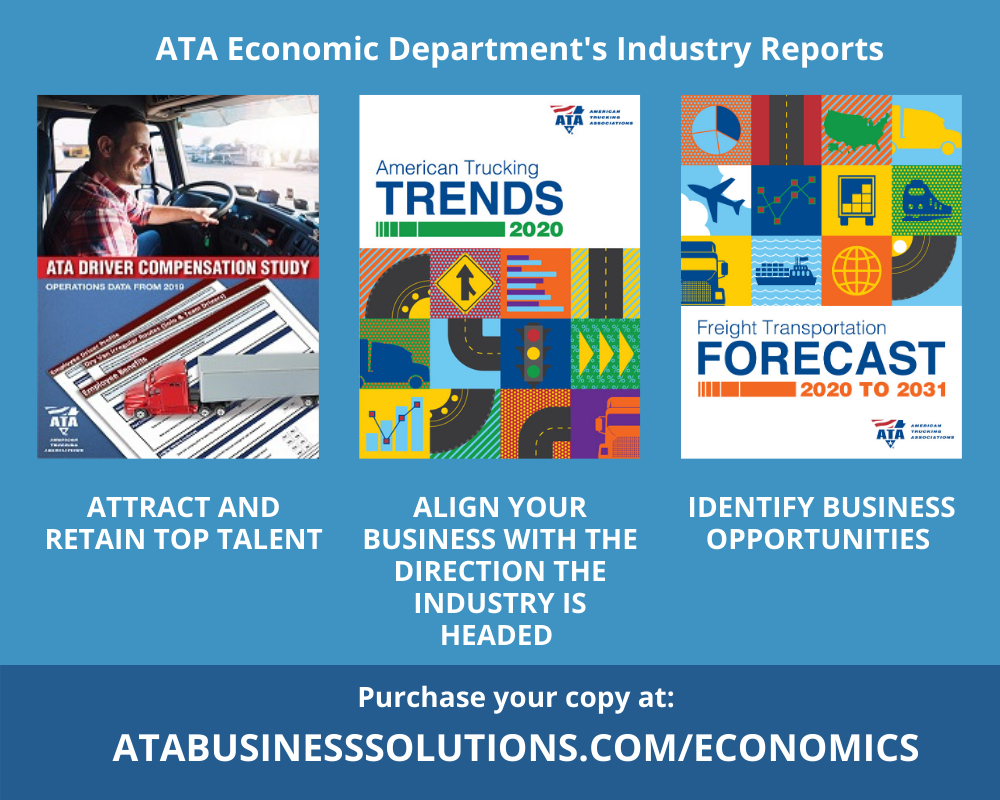